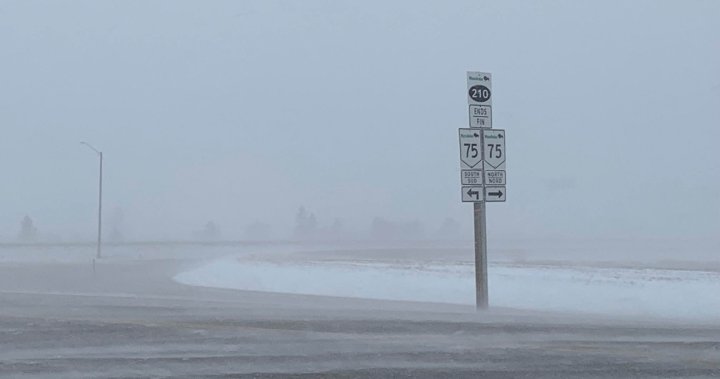 The major storm Manitobans have been preparing for over the last two days blew into the province overnight, and is expected to keep blowing until Friday.

According to Environment Canada, the bulk of the snow is expected on Wednesday, accompanied by a strong northeast wind.

By the time the storm eventually tapers off, forecasters are looking at a range of 30 to 40 centimetres of snow for Winnipeg, as well as 40 to 60 cm for the western Red River Valley, including Portage la Prairie and Morden.

Western Manitoba is looking at 25-50 cm, while the eastern Red River Valley and southeastern Manitoba should see 20-40 cm of snowfall.

Widespread snowfall accumulations of 30 to 50 centimetres are expected for much of southern and central Manitoba and North Dakota by Friday, the province said.

1:49
Travel disrupted during storm in Winnipeg

Travel disrupted during storm in Winnipeg

Scott Kehler of meteorological firm Weatherlogics told 680 CJOB’s The Start that while the snow arrived in the province a little bit later than expected, the system had not slowed down.

“We had those strong northeasterly winds and those winds were fairly dry, so they were eating away a bit at the edge of the snow moving up from the south,” Kehler said.

“Finally, the snow overcame the dry air, and now we’re beginning to see those heavier bands set up, so the day will progressively get worse from here on out.

“We’ll continue to see these very heavy bands of snow pass through.”

0:31
Winnipeggers talk about the first few hours of the blizzard

Winnipeggers talk about the first few hours of the blizzard

#rcmpmb continually assessed highway conditions overnight & continues to monitor this morning. Anticipated widespread highway closures across southern MB were not required. At this time, #MBHwy75 south from Morris to the border & #MBHwy1 from Elie to Austin are officially closed. pic.twitter.com/6ZIt25YQPl

The storm cancelled all flights to and from Winnipeg’s international airport Wednesday, but officials said a number of flights are still scheduled for Thursday.

“Certainly if anyone is traveling or planning to travel tomorrow, we’re really encouraging people to check with their airline,” said the airport’s spokesperson, Tyler McAfee, adding those looking to fly Thursday should arrive at the airport earlier than normal.

Manitoba RCMP closed major highways overnight in an effort to help prevent people from getting stranded in the storm.

The Mounties reversed that decision Wednesday morning, but some highways were still shut by the bad weather.

Highway closures included much of the Trans-Canada Highway through Manitoba and the Perimeter Highway surrounding Winnipeg.

The province said snow clearing equipment had been deployed on highways hit by heavy snow by Wednesday afternoon.

Among other closures across the province, all metro Winnipeg school divisions took the rare move of cancelling all bus service and classes on Wednesday and Thursday, and a number of rural school divisions have followed suit.

The City of Winnipeg said closures of several civic facilities including libraries, pools and leisure centres would extend until at least Thursday, and garbage and recycling pick-up would be suspended Thursday.

Winnipeg’s Main Street Project says it has opened a 24-hour temporary shelter space to help Winnipeggers with nowhere to go during the storm who would otherwise be living on the streets.

“It’s really important that people have a safe place to go in inclement weather — it means that folks who normally find their way outside don’t have that option,” Mahmood said.

“We’ll be serving three meals a day, providing clothing, and all the supplies people need. People are able to stay there the whole time, no one has to go out in the cold at all.”

Mahmood said Main Street Project has already been active with its van outreach program, visiting homeless people and letting them know about the coming storm and helping them with necessary supplies.

Large events, like the Winnipeg Jets’ game against the Seattle Kraken, originally scheduled for Wednesday night at Canada Life Centre, have been postponed.

A major, city-wide snow clearing operation with help from roughly 200 pieces of equipment was in progress by Wednesday afternoon.

“What’s going to happen from there is you’re going to see a need to stay off the roads as much as possible to allow us to clear those (priority) 1 streets so that we can have access for emergency services and critical and essential services,” Shaw said.

Shaw said the city has contingency plans in place to make sure paramedics and firefighters can get to 911 calls despite the extreme weather.

The city’s manager of street maintenance, Michael Cantor, told 680 CJOB at 10 a.m. that plows were already out on the roads.

“A city-wide truck plowing operation is in progress. Crews are focusing on our regional streets, collectors and bus routes, including sidewalks and pathways,” Cantor said.

“We’re probably going to re-plow them a few times during this event.

An extended snow route parking ban will go into effect at midnight.

Outside the city, in the Southern Health-Santé Sud region, a unique contingency plan is in place to ensure healthcare workers can get to work safely during the storm.

“We teamed up with the Southern Emergency Response Committee, and they have arranged to do a convoy to get all of our staff to work in the next upcoming days,” Southern Health’s Lorraine Cassan told Global News.

“They’re mustering in Winkler at the Winkler Arena and then in Morden at the Access Centre. They’re doing that three times a day. They’ve arranged for a snowplow to go first, and then there’s a fire engine — and the staff will be able to follow so they can get to work safely.

“It’s going to really help us get our staff in so we can take care of our patients.”

Big thank you to the @cityofmorden , Morden Fire dept, and the RM of Stanley for helping us get to and from work during the storm! No horns in this convoy because we didn’t want to disturb anybody. pic.twitter.com/JfiNJz8vnW

Portage la Prairie mayor Irvine Ferris told Global News his community was hit particularly hard during the devastating Thanksgiving storm in 2019, but plans are in place to make sure a similar experience doesn’t happen again.

“We’ve definitely made a lot of changes — that was quite a learning experience two-and-a-half years ago,” Ferris said.

“That happened going into a long weekend. It started really on the Friday, and over the Friday night we lost power to 90 per cent of our city, including hospitals and care centres.”

Ferris said the city of Portage has taken a number of steps to mitigate some of the issues that arose during that crisis, including the installation of large generators as well as reserve tanks filled with diesel to run those generators.

“I think our community did a really good job of reacting last time, and this time we feel like we’re prepared for this storm if it’s similar at all to 2019.”

Power had been restored to all affected customers by late in the afternoon, Hydro said through their Twitter account.

Temperatures were expected to stay below freezing for the next few days, so the post-storm cleanup could take a while.

Those below-normal temperatures bring an upside, however. They are expected to reduce the threat of major flooding posed by all the new snow.

“It’s not supposed to melt until possibly Tuesday, when we actually get positive temperatures,” Transportation and Infrastructure Minister Doyle Piwniuk said.

“And it’s going to be a slow melt. That’s the best conditions we could hope for.”

The Red River, which runs through Winnipeg, had already begun to recede from a crest earlier in the week.

–With files from Shane Gibson and The Canadian Press

In response to the current winter storm, customers may experience cancellations or delays in service. Outages and emergencies will be responded to when safe and able for crews to travel.

To report an outage ⬇️https://t.co/wxzGxFquxr 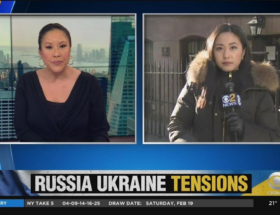 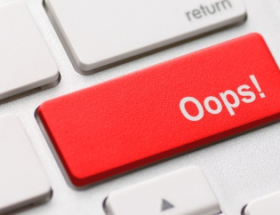